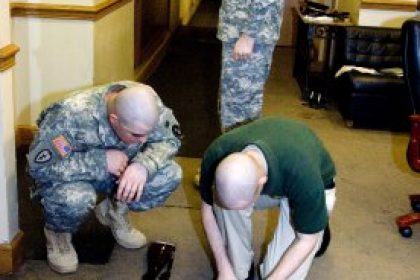 As the sun rises and sets over Arlington National Cemetery, gates open and close to sacred ground that honors thousands of military personnel from wars past.

One place in particular honors all the unknowns from military conflicts of the last hundred years. It is here, at the Tomb of the Unknowns, elevated on a hill overlooking the nation’s capital, where Army sentinels keep vigil over the fallen Soldiers from the nation’s wars day in and day out.

“My standard will remain perfection,” is a statement that many who visit the tomb will hear from the sentinels who guard the unknown servicemembers. This phrase represents line six of “The Sentinel’s Creed.” The creed is a reminder of what the guards strive to achieve and why they do what they do.

“We are not saying we are perfect because no one is perfect, but we are always striving to maintain that standard,” said Cpl. Brandon Waleszonia, a Soldier with the 3rd U.S. Infantry Regiment (The Old Guard) and assistant relief commander at the Tomb of the Unknowns.

“I spent two years in the regiment. I decided that before I left, I wanted to do something that I felt was bigger than myself. That’s why I volunteered to come down to the unit,” he said.

Waleszonia said his children — a 2–year-old son and a 9-month-old daughter — come see him march on the plaza, but they don’t fully understand what he’s doing. “Later on down the road I can tell them what the job means,” he said. “I hope my son would actually like to do this job. I do try to bring my kids up to that [creed] standard as well.”

Only 593 Soldiers can claim they earned the Tomb Sentinel Badge. Even after leaving the Army, they maintain the badge and strive to live up to the creed in all aspects of their lives.

Currently there are 21 infantrymen, two food specialists and one motor pool sergeant stationed at the tomb. Although there have been female tomb guards in the past, none currently serve.

“It’s an honor to get out there and do a mission that so few will ever be afforded the opportunity [to do],” said Sgt. 1st Class Chad Stackpole, sergeant of the guard at the Tomb of the Unknowns.

“In general, the life of a tomb guard is one [where the individual] desires to be the best, to represent the best and strives at perfection … never satisfied with his work,” he said.

The first unknown to be interred at the tomb site was from World War I. Following World War II, Vietnam and Korea, an Unknown Soldier was interred for each war. However, the Vietnam unknown was disinterred, identified and was not replaced. Current science makes it hard for there to be any new unknowns due to advanced DNA analysis.

“[You do it] to the point where you could literally go down and execute a guard change with your eyes closed and … nobody would ever know it because you’re wearing [sunglasses],” said Stackpole. “And there are guys who will go out there, and they will close their eyes because they have measured [the step count and cadence].”

Training consists of memorizing knowledge on the tomb to the point where one can write out every letter, comma and period of prepared material. The guards also learn where certain key individuals are buried in the cemetery, such as highly-decorated Army icon Sgt. Audie Murphy. They also learn how to press a uniform, how to walk out on the plaza and at what angle their weapon needs to be positioned.

Tomb Guards are known to stand in front of mirrors and grade themselves. There is no such thing as too much training when you’re striving for perfection.

Every tomb guard is constantly being graded on their uniform, stance and weapon. In the guard quarters underneath the Memorial Amphitheater, there are monitors that allow guards to watch whoever is walking on the plaza, so when an individual comes off duty they can be critiqued.

There are three relief units explained Stackpole. Each unit is on a nine day schedule. Days one, three and five, the sentinels are on a 24-hour shift schedule at the tomb. On days two, four and six they are at rest but still required to train and work on perfecting their uniform. Days seven and eight, the sentinels are completely off duty, and day nine is total relief training. Much like a last combined arms training, the ninth day is to make sure there will be no issues when on duty.

The amount of walking tomb guards do varies from day to day. “With the manpower we have, typically a Soldier will do anywhere from one to three, one-hour walks during the winter. In the summer, [it’s] anywhere from five to eight, half-hour walks,” said Cpl. Christopher Anthony, assistant relief commander at the Tomb of the Unknowns.

Anthony had planned to leave the Army and go to school, but he re-enlisted with a two-year contract specifically to become a tomb sentinel.

As a guard at the Tomb of the Unknowns, there are various missions for all to carry out, from walking the plaza, training incoming Soldiers, maintaining appearances, training to perfect stance and timing and conducting ceremonies on behalf of various organizations that want to lay a wreath at the tomb.

Only noncommissioned officers are permitted to perform guard changes.

“Laying the wreaths means a lot to me. The public people who come and lay the wreaths, I feel they are showing their respect to the unknowns which makes me proud to do my job,” said Waleszonia.

No one day is the same, explained Stackpole. There could be no ceremonies scheduled one day, but over 30 wreaths laid on another. This Veterans Day, for example, had President Barack Obama and First Lady Michelle Obama on site to lay a wreath, followed by several other organizations that performed the solemn ritual the same day.

A few weeks ago, a French and American delegation came to commemorate the 90th anniversary of the first unknown chosen for the tomb. “It’s great that we honor the day he was selected, but more so [because of] what he did. The fact that he gave his life for the freedom of all — the freedom of everybody. It’s a constant reminder. Look how long ago he did [what he did] and what we’re still doing for him,” said Stackpole.

The Soldiers are at the tomb 365 days a year and have stood guard through both hurricanes and snow storms and weathered whatever Mother Nature brings their way. During extreme weather, tomb guards can go in a sheltering sentinel box to stand vigil and call down to other sentinels to let them know what the weather conditions are.

“We kind of pride ourselves on the fact that we will be out there with the unknowns, enduring the elements no matter what,” explained Anthony.

Few can guarantee that their current job will stay with them for life. However, the Soldiers who earn the Tomb Badge can say with distinction that they have honored the unknown Soldiers that gave the ultimate sacrifice for their country. With the creed and history of each interment and disinterment memorized, the job will stay with them beyond their career as a Soldier.

“Ultimately, we are truly the face of the nation to over 5 million visitors a year here inside Arlington National Cemetery,” said Stackpole.

About Jay B. Hall 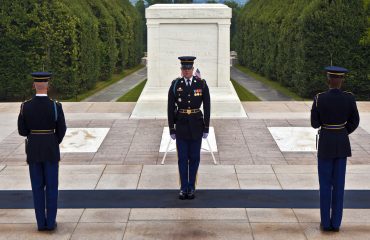 At Tomb of the Unknowns, a ritual of remembrance

Members, please make sure you check and update your member profile. Dismiss