May 18, 2020 – The family of Major General Donald C. Hilbert announced today the passing of General Hilbert. It is an extraordinarily sad day for the 3rd Infantry Regiment and The Old Guard Association. Don was the 62nd Regimental Commander serving in that capacity from 1977 thru 1979. He was TOGA Life Member 0061. If you attended a TOGA Reunion you were likely to see him sharing a smile and a good word. He led the TOGA element of our Pass In Review on many occasions. The TOGA contingent stood a bit taller when we marched with him.

May 2020 marks 62 years of his affiliation with The Old Guard. The General is the only officer to have served as both the Regimental Commander and the Commanding General of MDW.  In 1995 he was made a Distinguished Member of the Regiment and was the first and only Honorary Colonel of the Regiment. His legacy will live on in the Regiment and TOGA forever. 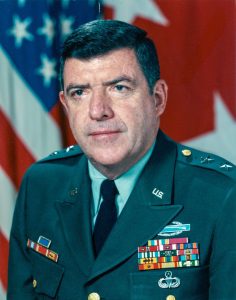