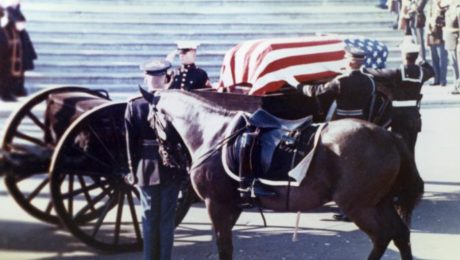 If you are old enough to remember that windy and biting
cold day in November 1963, you will recall the two most
memorable photos taken during the funeral procession of
President John F. Kennedy …the first, of his young son,
John Jr., saluting as the Caisson bearing his father left St.
Matthew’s Church on its final journey to the hallowed
ground of Arlington National Cemetery
The second photo was captured by the cameras of tens of
thousands of onlookers on that fateful day…’ that of a
sleek, well-muscled jet black horse with a small white star
on his forehead. Exquisitely groomed, even his hooves
were polished. His black saddlecloth was trimmed in
white. and a gleaming regimental sword dangled from his
glistening saddle. As a symbol of a fallen leader, he
carried spurred cavalry boots thrust backwards in the
stirrups’*. The caparisoned horse was Black Jack.
Black Jack was a horse with high vitality. Every step of the
way, his head bobbed up and down as he tugged at the
walker’s line. He pranced in such lively and spirited
manner that at times he appeared to be walking sideways.
Black Jack served in The Old Guard for 24 years.
Noteworthy, he is the last Army Quartermaster-issued
horse to carry the official “US” brand, and one of only two
horses in our Nation’s history to be buried with full military
honors.
As a tribute to this beautiful horse, a memorial ceremony
is planned to observe the fortieth anniversary of his death
and interment, February 1976, on Summerall Field, Fort
Myer (JBMHH), Virginia. At this writing, the date selected
for this event will be Saturday, February 6, 2016, at 1100
hours. The event will take place on Summerall Field,
regardless of weather. A reception, by invitation only, will
take place at the Caisson Section, where tours and
refreshments with the troops will take place.
The primary planner of the event states that this will be a
never-before attempted equestrian version of the wreath
laying ceremony at the Tomb of the Unknown Soldier, with
horses and Soldiers of the Caisson Section taking part in
the event.